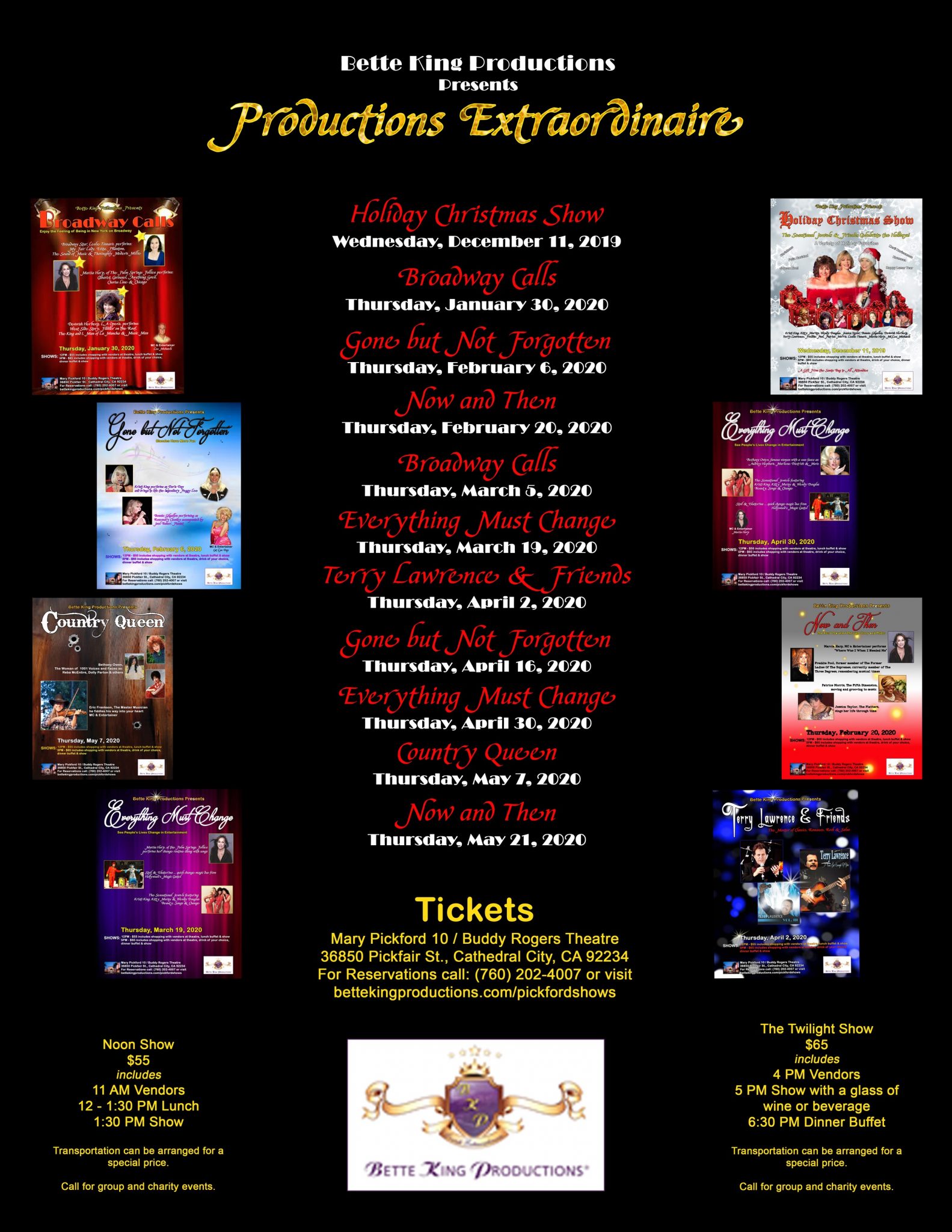 In cooperation with the City of Cathedral City and the Mary Pickford Theatre, we are pleased to announce that Bette King Productions and her Productions Extraordinaire will offer a season of variety musical show starting on December 11th and will run through May of 2020.  The performances will occur in the large, comfortable Theatre 10.  These are the type of shows that you used to see at the Palm Springs Follies.

Bette King as a producer of many shows in the desert has discovered the wealth of talent here; and has picked up the ball and is running with it. ENCORPORATING THE TITLE “PRODUCTIONS EXTRAORDINAIRE”.  The opening show, which is a Holiday Celebration, will be held on Wednesday, December 11, 2019 with a noon and a twilight show. The remaining shows for 2020 will be held on Thursdays featuring a noon and a twilight showing.

The Sensational Jewels will be hosting a Holiday Celebration of Christmas, Navidad, Hanukkah, Kwanza, and Lunar New Year.  They will be joined by friends: Terry Lawrence, Devorah Herberg, Leslie Tinnaro, Marcia Harp, Les Michaels, Bonnie Gilgallon; also featuring Jessica Taylor of the Platters.  They will be performing a diverse selection of songs and dance that will truly bring together the spirit of the Holidays.  In today’s times it is the best way to truly celebrate the diversity of the residents of Coachella Valley.  Everyone attending will receive a gift from a Santa Bag, as Bette King thanks you for your support of her productions.

GONE BUT NOT FORGOTTEN

Shows at Noon and 5 pm

Leslie Tinnaro, a Broadway talent will perform songs from Evita, Phantom of the Opera, My Fair Lady, the Sound of Music and Thoroughly Modern Mille.

Marcia Harp, Entertainer and performer formerly of the Palm Springs Follies will perform songs from Cabaret, Carousel, Anything goes, Chorus Line and Chicago.

Devorah Herberg, Direct from the LA Opera Company, performs songs from West Side Story, Fiddler on the Roof, the King and I, the Man of La Mancha and Music Man.

Our world is changing and so do the performers; as they will amaze you not only with their talent, but also with their Changed Acts.

Marcia Harp; formerly of the follies, will be your M.C. and will belt out the songs of change.

Bethany Owen, woman of a thousand voices and faces, will be premiering in and performing her new show featuring the famous hats of legendary film stars.

Stihl and Ekaterina; from the Magic Castle in Hollywood, will be thrilling you with their quick- change act.

The Sensational Jewels featuring Kristi King, Performer from Las Vegas, and beyond, Kitty Murray former performer with Disneyland, Jonathan Winters, and Rich Little, and Wendy Douglas, performed with Johnny Mathis singers and one of Dean Martin’s original Golddiggers, and performed with Tom Jones, Frankie Avalon and Bob Newhart. The Sensational Jewels will perform their fabulous numbers with lavish costuming.

This show is presented by 4 Famous performers that bring you their life as performers today and their great acts and then take back in time to when they started.

Patrice Morris of the 5th Dimension

Jessica Parker formerly of The Platters

This show is performed in Song, Dance, Frivolity and the stories behind their lives as part of their performance will bring you everlasting memories.

The cost of the noon shows will be $55.00; which will include, a shopping vendor experience, a buffet lunch, and the show.  The twilight show; will be the vendor experience, with a glass of wine or other beverage to enjoy while shopping, the show, and a buffet dinner.

VENDOR SHOPPING: there will be 10 vendors set up for your shopping pleasure. The bus tour companies, who used to bring people for the Follies, noted that their passengers loved to come to shop, eat and see the show.

TICKETS:  There will be no tickets sold at the Mary Pickford Theatres, they may only be purchase through Bette King Productions at bettekingproductions.com, or by calling the box office at 760-202-4007.

Bette King is very excited to be working with Ted Hane, manager of the Mary Pickford Theatres, and Chris Parman, Communications / Events Manager for the City of Cathedral City.